How likely is it that someone with Factor V Leiden will develop a blood clot? 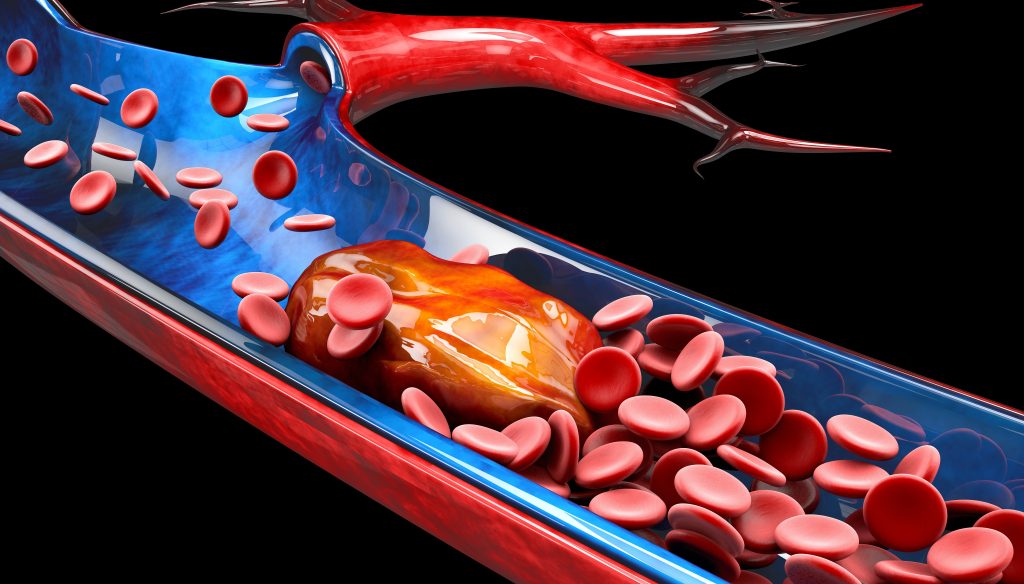 Most blood clots or thrombosis associated with Factor V Leiden develop as a deep vein thrombosis (DVT) in the legs, but upper extremity thrombosis also occurs.

Thrombosis in unusual locations including cerebral, retinal, hepatic, ovarian, and renal veins may also occur but are less common. The risk of a cerebral vein thrombosis is increased 3- to 5-fold in Factor V Leiden heterozygotes.

The chances of a person with the Factor V Leiden gene mutation developing a blood clot are affected by many different variables and coexisting and circumstantial risk factors:

Heterozygous for Factor V Leiden – Studies vary but most agree that there is a 3- to 8-fold increased risk of developing a blood clot sometime during your lifetime compared to the unaffected population. In heterozygous patients, the clot is usually related to a trigger event, such as pregnancy, injury, or surgery.  Population studies suggest that approximately 10% of Factor V Leiden heterozygotes develop VTE over their lifetime. The lifetime risk of VTE is higher (25–40%) in heterozygotes in families with a history of VTE. Heterozygosity for Factor V Leiden is not associated with an increase in mortality or reduction in normal life expectancy.

Family history of VTE in a first degree relative – A study found that individuals with a Factor V Leiden mutation who had a first-degree relative with a history of thrombosis had a 3-fold higher risk for VTE than Factor V Leiden carriers with a negative family history. The risk was increased 18-fold in those with two or more symptomatic relatives.

Factor V Leiden interacts with these environmental risk factors to increase the risk of VTE.

At least 50% of thrombotic episodes in individuals with Factor V Leiden are provoked by additional predisposing factors.

In a large cohort of symptomatic Factor V Leiden homozygotes, the initial VTE was associated with circumstantial risk factors in 81% of women and 29% of men. Oral contraceptives and pregnancy were the most common predisposing factors in symptomatic women. Thirteen percent of major surgeries were complicated by VTE suggesting an approximately 20-fold increase in risk.

Thus, the risk is compounded/increased by the presence of the following:

Blood Type – Having the blood types A, B, or AB increases your risk of developing a blood clot by 2- to 4-fold compared to those with type O blood.

Obesity / Body Mass Index (BMI) – Being overweight further increases your VTE chances by 2.5- to 8-fold depending on your BMI.

Minor Injury – A large population-based study found that minor leg injuries are associated with a 5-fold increased risk for VTE. Factor V Leiden carriers with a minor leg injury had a 50-fold higher thrombotic risk than individuals without these risk factors.

Extended Travel – Traveling for more than four hours in a car or airplane without walking or movement increases your chances by 14- to 16-fold.

Surgery / Immobility – Surgery, especially surgeries such as hip or knee replacement that leave the patient immobile for long periods of time, increase the risk for blood clots. Factor V Leiden carriers who are heterozygous are believed to be 5 to 13 times more likely to develop a blood clot and homozygous carriers are 20 times more likely during or right after a surgery.

Age – The risk and incidence of VTE increases with age. The risk increases at a greater rate with advancing age in individuals with a Factor V Leiden mutation, suggesting that thrombosis involves acquired and genetic predisposing factors. In the Physicians’ Health Study, the mutation was found in approximately one third of men older than 60 years with an initial spontaneous thrombotic event.

In a population-based cohort study, the risk for VTE was significantly increased only among Factor V Leiden heterozygotes older than 60 years (relative risk 3.6). Another prospective study found that the absolute risk for VTE in unselected individuals with Factor V Leiden increased with age, body mass index (BMI), and smoking. The 10-year risk for VTE among heterozygotes was 10% in smokers older than 60 years with a BMI >30 kg/m2, in contrast to a <1% risk in nonsmokers younger than 40 years who were not overweight. The corresponding absolute 10-year thrombotic risks for Factor V Leiden homozygotes with and without these risk factors were 51% and 3%, respectively.

A child’s risk of getting a clot increases when they have a serious medical condition, a central line, an undiagnosed autoimmune disease or are on birth control (also known as oral contraceptives and hormones).

A teenage girl who is on birth control containing estrogen, however, has about a 3- to 4-fold risk of getting a blood clot. If she also has Factor V Leiden, then the risk for getting a blood clot is 30-40 times higher than an otherwise healthy teenager.

Birth Control containing Estrogen – Estrogen is used as a birth control and hormone replacement option. Estrogen alone does not cause blood clots but increases the risks of developing a blood clot.

The use of birth control containing estrogen has also been found to increase the risk for a cerebral venous sinus thrombosis (CVST), a venous blood clot that forms in the brain, by 20-fold for women who have the Factor V Leiden mutation.

Hormone replacement therapy (HRT) including estrogen and estrogen-like drugs taken after menopause – Postmenopausal women taking HRT have a 2- to 4-fold higher risk of developing a venous blood clot than women who do not take HRT. Women with Factor V Leiden who take HRT have a 15-fold higher risk.

Pregnancy / Childbirth – Many women with this mutation go through one or multiple pregnancies with no difficulties. Healthy women who become pregnant have a 4-fold increased risk of developing a blood clot during their pregnancy.

Women who have heterozygous Factor V Leiden have an 8- to 52-fold increase depending on coexisting risk factors such as obesity or advanced age. Homozygous carriers have much higher risks with some studies claiming as high as 100-fold.

The greatest risks during pregnancy occur during the first few weeks after childbirth when it can increase by as much as 20-fold. The greatest risk is the week following the birth when the risk can be as high as 100-fold.

Factor V Leiden is present in about 40% of pregnant women who present with a venous thrombosis.

Studies have suggested that a woman who is pregnant with Factor V Leiden may also have a small increased risk of preeclampsia, delivering a low birth weight baby, and an increased risk of miscarriage and stillbirth due to clotting in the placenta or the umbilical cord. These studies are not conclusive and more research is needed.

Presence of other types of thrombophilia combined with Factor V Leiden – There is an increased prevalence of Factor V Leiden among symptomatic patients with deficiencies of Protein C, Protein S, and antithrombin and the prothrombin 202010G>A mutation. Individuals with two defects have a higher risk for thrombosis than family members with a single defect. In a pooled analysis of eight case-control studies, individuals with a single Factor V Leiden or prothrombin 20210G>A allele had a 5-fold and 4-fold increase in thrombotic risk, respectively. In contrast, individuals doubly heterozygous for both mutations had a 20-fold increase in relative risk, illustrating the multiplicative effect of these two mutations on overall thrombotic risk. A prothrombin 20210G>A allele was 4- to 5-fold more common in symptomatic Factor V Leiden homozygotes with VTE than in controls with no thrombotic history.

What can I do to help prevent blood clots?

The National Blood Clot Alliance has a lot of excellent information about the signs and symptoms, treatment, and prevention of blood clots.