How Prevalent is Factor V Leiden?

Factor V Leiden is a very common genetic disorder with more than 3 million cases in the United States per year.

There are millions of people throughout the world with Factor V Leiden thrombophilia. 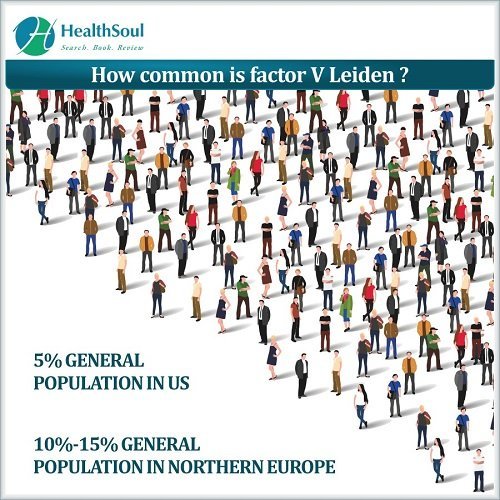 The percentage of people who have Factor V Leiden depends on the ancestry of the population. Higher percentages are reported among people of European ancestry compared to people from other continents.

The National Human Genome Research Institute estimates that 3% to 8% of the general U.S. and European populations carry the heterozygous type of Factor V Leiden (only one of the two factor V genes are altered).

The homozygous type of Factor V Leiden (both the factor V genes are altered) is much rarer, affecting an estimated 1 in 5,000 Caucasians.

The highest heterozygosity rate is found in Europe. Within Europe, the prevalence varies from 10% to 15% in southern Sweden and Greece to 2% to 3% in Italy and Spain. The mutation is found in 3.8% of individuals in France, but the frequency ranges from 1.3% in the southwestern regions of France to 7.1% in northeastern France.

The highest occurrences are in the countries of Greece, Sweden, and Lebanon where up to 14% of the people are thought to carry Factor V Leiden.

The mutation is extremely rare in the Asian and indigenous Australian populations and was thought to be completely absent in the African population.

However, in a report dated 11/29/2018 in the American Society of Hematology’s “Blood” publication, researchers reported what they thought could be the first case in a thrombosis patient born and living in Africa. The patient was found to have homozygous Factor V Leiden and heterozygous protein gene G20210A mutation (the second most inherited blood clotting disorder) during her pregnancy.

There is little genetic data from many parts of Africa which is the most genetically diverse continent in the world. More studies are needed that explore the prevalence of the common genetic risk factors in those regions.

Her study also gave us the following table showing its prevalence in the rest of the world.  (See Table Left & Below)

The Factor V Leiden mutation seems to occur fairly equally in both men and women in all populations. Men become more at risk for blood clots as they get older while women are at a greater risk for blood clots while using birth control and hormone replacement therapy and during pregnancy and the weeks after childbirth.

However, not all patients diagnosed with a venous blood clot carry the Factor V Leiden mutation.

The ranges vary but most data suggests that heterozygous Factor V Leiden is found in up to 30% of patients who present with a venous blood clot. Some data suggests that it accounts for as much as 40% to 50% of venous thrombosis cases.

Prior to the discovery of Factor V Leiden, fewer than 10% of cases of thrombosis could be explained by an inherited thrombophilia.

For recurrent VTE patients, the number increases to 50% to 60% of patients or even higher in some studies.