I'm having surgery... Should I be tested?

Some studies have shown that, depending on the type of surgery and the type of Factor V Leiden you carry, your risk for a blood clot during and after a surgery can increase by 5 to 20 times.

Blood clots are a leading cause of preventable deaths in U.S. hospitals according to the Centers for Disease Control and Prevention. Surgery is one of the major causes of these blood clots. The most common is a deep vein thrombosis (DVT), a blood clot that forms in the deep veins of your body, often in your leg. While a DVT is a serious condition, it can become life-threatening if part of the clot breaks loose and travels to the lung. This is called a pulmonary embolism or a PE. As many as 100,000 people die because of blood clots each year. Three in 10 people who have a blood clot will develop another within 10 years.

The risk for blood clots increases substantially during or after a surgery. There are multiple reasons for this, but one major cause is inactivity. Many people are inactive after a surgery because they’re in pain, sick, or unable to walk. Sometimes, the surgery itself can cause a blood clot. Long procedures where you’re lying on the operating table for many hours allow your blood to settle and pool, which makes it easier to clot.

When you stop moving, blood flows more slowly in your deep veins. Muscle movement is needed to continuously pump blood to your heart. Inactivity causes blood to collect in the lower part of your body, generally the leg and hip regions. This can lead to a blood clot. You’re most likely to get a clot between two and ten days after your surgery, but your odds are higher for about three months.

The type of surgery you are having can also increase the risk of having blood clots after the procedure. Surgeries like hip replacement, knee replacement, or any other type of surgery that involves the lower extremities are of special concern when it comes to the development of blood clots. Most people who have one of these major surgeries are less active for several days or weeks after the surgery. Joint replacement patients are at highest risk for developing a deep vein thrombosis (DVT) of the leg two to ten days after surgery, and remain at risk for approximately three months. Research also found that people with congestive heart failure (a condition in which the heart is not able to pump enough blood through the body) were at a greater risk for having a blood clot after major hip or knee surgery.

If your surgery requires your arteries or veins to be cut or repaired, the risk of a blood clot is higher because your body works to stop bleeding by forming clots. If you’re having a surgery where your heart is stopped, typically a heart bypass surgery (CABG), your risk of a blood clot is also increased. Surgeries that involve scraping or cutting into a bone, such as a hip replacement, may release substances known as antigens. These antigens trigger your body’s immune system and can lead to clots. Additionally, in response to the removal or movement of soft tissues during surgery, your body may release naturally occurring substances that encourage blood clotting.

Your medical and social history may also contribute to clot formation. For example, if you’re a smoker, you’re at higher risk for the formation of blood clots than the average person, even without having surgery.

What types of blood clots are common after a surgery? 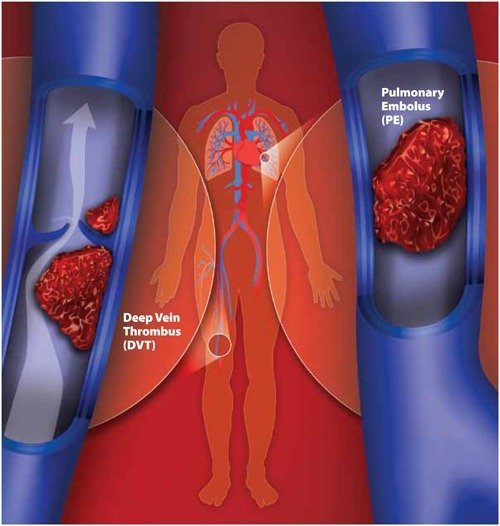 A deep vein thrombosis (DVT) is a venous blood clot that develops in a deep vein usually in the legs in the calf and/or thigh. It is the most common kind of blood clot people have after surgery for a total hip replacement, total knee replacement, or a broken hip. Most people who have one of these major surgeries are less active for several days or weeks after the surgery. This can cause blood flow to slow down, which increases the risk for a blood clot. People with a DVT may not have any symptoms and may not know they have one.

According to the National Center for Biotechnology Information and the U.S. National Library of Medicine, as many as 4 people out of 10 who do not receive medicine to prevent blood clots develop a DVT within 1 or 2 weeks of having major hip or knee surgery. Taking medicine or using a device to prevent blood clots may lower the risk of developing a DVT after hip or knee surgery to 1 or 2 people out of 10.

Another type of blood clot is a Pulmonary Embolism (also called a PE), which is a blood clot that breaks free from somewhere in the body and travels through veins. If the clot should happen to reach the lungs, it can block blood flow. A pulmonary embolism is an extremely serious condition an can be life threatening.

Should I be tested for Factor V Leiden prior to having surgery?

If your healthcare professional is aware that you have Factor V Leiden, they can take additional preventative measures before and after your surgery to help reduce the risks of blood clots.

Blood clots associated with surgery are a serious issue and should not be taken lightly. As we mentioned above, your chances of getting a blood clot after surgery increases when you have an acquired or inherited disorder that affects blood clotting like Factor V Leiden.

The increased tendency for your blood to clot as a result of carrying the Factor V Leiden mutation combined with the increased risks associated with surgeries greatly increases your chances for a blood clot and should be a concern.

If your healthcare professional is aware that you have Factor V Leiden, they can take additional preventative measures before and after your surgery to help reduce these risks.

If you will be having surgery such as a hip replacement, knee replacement, broken hip, or any other type of surgery that involves the lower extremities or will cause you to be immobile for a period of time, we recommend that you ask your healthcare professional if testing for Factor V Leiden should be considered prior to surgery.

The test to see if you have Factor V Leiden is not intrusive and one that your healthcare professional can perform with a simple blood test.

Ultimately, for those who do not fall within the current testing guidelines and testing is not recommended, deciding whether to be tested for Factor V Leiden is a personal decision.

John M. Eisenberg Center for Clinical Decisions and Communications Science. Preventing Blood Clots After Hip or Knee Replacement Surgery or Surgery for a Broken Hip: A Review of the Research for Adults. 2012 Aug 30. In: Comparative Effectiveness Review Summary Guides for Consumers [Internet]. Rockville (MD): Agency for Healthcare Research and Quality (US); 2005-. Available from: https://www.ncbi.nlm.nih.gov/books/NBK107165/

DerSarkissian, Carol, How to Choose and Use Compression Stockings, (July 8, 2019), https://www.webmd.com/dvt/choose-compression-stockings